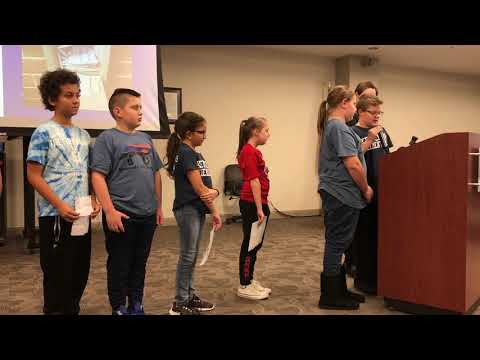 KINGSPORT — What would be a more appropriate to do at the December Kingsport school board meeting than honor the Jackson Elementary School student who won the school system’s Christmas card art contest this year?

Of course there also were other early Christmas presents in student stockings: a Dobyns-Bennett High School senior who recently learned he scored a perfect ACT score and national accolades for the Sevier Middle School student newspaper. In addition, the school board got to here stories told by Kennedy Elementary School Student Ambassadors.

WHO WAS THE CHRISTMAS CARD ART WINNER?

The Board of Education Tuesday night, Dec. 10, honored Karma DiGiaimo, first-grader at Jackson Elementary School, for being selected the 2019 Kingsport City Schools Christmas card artwork winner. Karma is in Paige Trent’s art class at Jackson and the daughter of Victoria DiGiaimo. Her art is on the card the school system sent out this year.

Superintendent of Schools Jeff Moorhouse, who presented her a framed certificate and her artwork, along with a stack of the Christmas cards, said Karma’s art work was among more than 100 submissions, chosen from the best art submitted from all Kingsport elementary schools.

WHO GOT A PERFECT ACT?

Kendrick Tate, a senior at D-B, was honored by the board and board President Carrie Upshaw for scoring a perfect 36 composite score on the college entrance exam.

His top score, the third in the graduating class of 2020 at D-B, came on his sixth taking of the ACT plus a practice ACT test in the seventh grade on which he scored a composite of 24. He said he started to have the goal of a perfect score around the end of his sophomore year. The test measures English, math, reading and science each on a score of 1 to 36. A student’s composite score is an average of the four tests, meaning Kendrick scored perfect in all four section.

He plans to attend either Michigan or Alabama and major in either mechanical or biomedical engineering, although he said he hadn’t ruled out other schools quite yet. His father after the meeting said Kendrick had a Harvard University interview last week, scores a 30 as a freshman, 32 as a sophomore and a 34 as a junior before getting the 36 as a senior.

WHAT WAS THE STUDENT AMBASSADORS PRESENTATION?

The Kennedy Elementary School ambassadors gave a presentation to the board about their leadership group, open to students in grades K-5 at the school where Janice Irvin is principal. They talked about everything from the construction and groundbreaking on the new playground to various after-school clubs and activities and at the end gave two Kennedy Coyotes “howl” for the board.

Other activities include a talent show, implementation of the HOWL (H is for helping others, O is for overcoming challenges, W is a willingness to learn and L is leading with respect) student expectations, the Kennedy Dribblers and Kennedy Kudos, where student accomplishments are recognized.

WHAT WERE THE SEVIER NEWSPAPER NATIONAL ACCOLADES?

The Sequoyah Scribe, Sevier Middle’s student newspaper, and sponsor David Flanary were honored by board member Julie Byers and the board for winning the national Pacemaker Award, presented recently in Washington, D.C. by the National High School Journalism Convention.

The Scribe was the only middle school in that nation to get the honor and the only school of any level to win in Tennessee. It won the national award in 2014 and was a finalists in 2017, 2018 and 2019.

In addition, Olivia Fleming, now a freshman at D-B, was honored for her work with the Scribe last year. Her story, titled “Vaping becomes a dangerous trend among teens,” won second place “Story of the Year” in the middle school category, and her “Neonatal abstinence syndrome is affecting more Tennessee babies” won an honorable mention in the same category.